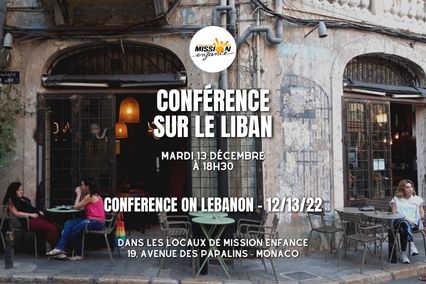 "Between crisis, archaism and modernity - A perspective on Lebanon".
by Charles al-Hayek, historian, consultant

Charles al-Hayek has been the representative of our association in Lebanon for many years. He sheds historical and current light on this country of the East and its people, who are currently suffering greatly.

Tuesday 13 December at 6.30 pm
in the premises of Mission Enfance
19, avenue des Papalins

The conference will be followed by a Lebanese mezze

YOU ARE UNABLE TO ATTEND THE CONFERENCE ON 13 DECEMBER
BUT WOULD LIKE TO MAKE A DONATION IN FAVOUR OF THE LEBANESE CHILDREN: